Japanese culture was booming in our country, Indonesia in 2005 era. And nowadays, Korea do the same. It sounds late for me, because I’ve known Korean Fever in 2008. I was in 3rd year high school that time. I do love both of them, though I prefer Korea this time *I prefer their music influence ^^v. What about you readers? I’ll give you some comparison of them then choose which one do you prefer.

These country, both of them have been selected to be a host country for 2002 World Cup, do you remember? And they succeed to be a host country and made us know more about them. After that, Japan fever attack Indonesia in 2005, when that time anime and Japanese dorama came in our country. Slow but sure, Korea did the same. The influence us with drama first and year by year passed, they influenced us with their music “K-Pop”.

Do you prefer hanbok? Or kimono?

Basically, they’re same. The differences among them is Kimono more complicated and Hanbok is simpler. Historically, Kimono was the most historical. So, for this I choose Kimono. Besides Kimono, Japan has other traditional clothes, specially wear on Summer it’s Yukata. Yukata is simply wear but still cute and fashionable. 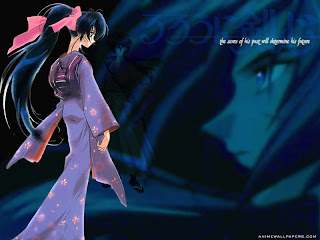 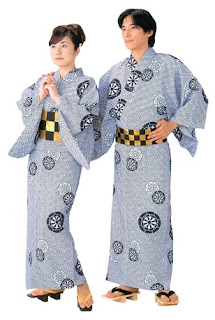 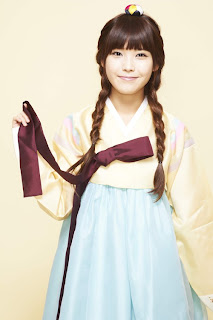 Japan has many kind of festival and traditional ritual.

The Japanese tea ceremony, also called the Way of Tea, is a Japanese cultural activity involving the ceremonial preparation and presentation of matcha, powdered green tea. In Japanese, it is called chanoyu (茶の湯) or chadō (茶道; also pronounced sadō?). The manner in which it is performed, or the art of its performance, is called otemae (お手前; お点前?). Zen Buddhism was a primary influence in the development of the tea ceremony.

Tea gatherings are classified as chakai (茶会?) or chaji (茶事?). A chakai is a relatively simple course of hospitality that includes confections, thin tea (薄茶 usucha?), and perhaps a light meal. A chaji is a much more formal gathering, usually including a full-course kaiseki meal followed by confections, thick tea (濃茶 koicha?), and thin tea. A chaji can last up to four hours.

"Ikebana" is from the Japanese ikeru (生ける?, "to place, to arrange, life, birth") and hana (花?, "flower"). Possible translations include "giving life to flowers" and "arranging flowers. The spiritual aspect of ikebana is considered very important to its practitioners. Silence is a must during practices of ikebana. It is a time to appreciate things in nature that people often overlook because of their busy lives. One becomes more patient and tolerant of differences, not only in nature, but also in general. Ikebana can inspire one to identify with beauty in all art forms. This is also the time when one feels closeness to nature which provides relaxation for the mind, body, and soul.

Uchimizu (打ち水?) refers to the sprinkling of water in Japanese gardens and streets. It is more than a mere matter of hygiene and has, in temples and gardens, a ritual or contemplative purpose. In streets in summer, it serves to cool the immediate area, keep down dust and also please neighbors. Japanese people see uchimizu as being exemplifying national values as it combines utilitarian, aesthetic, courteous and dutiful ends.

Traditionally, this was done with a bucket and ladle, and the sprinkler would wear a yukata, or summer kimono. In its more modern forms, various green groups have used the Internet to encourage people in Japan to do uchimizu with recycled water as a form of environmentally aware public courtesy

is a Korean dish that usually consists of marinated barbecued beef, although chicken or pork may also be used.

is a Japanese noodle dish. It consists of Chinese-style wheat noodles served in a meat- or fish-based broth, often flavored with soy sauce or miso, and uses toppings such as sliced pork (チャーシュー chāshū?), dried seaweed (海苔 nori?), kamaboko, green onions, and occasionally corn. Almost every locality in Japan has its own variation of ramen, from the tonkotsu (pork bone broth) ramen of Kyushu to the miso ramen of Hokkaido

is a Japanese dumpling made from mochiko (rice flour), related to mochi. It is often served with green tea.

Dango are eaten year-round, but the different varieties are traditionally eaten in given seasons. Three to four dango are often served on a skewer.

literally fried or grilled octopus) is a popular ball-shaped Japanese dumpling or more like a savory pancake made of batter and cooked in a special takoyaki pan (see below). It is typically filled with diced or whole baby octopus, tempura scraps (tenkasu), pickled ginger, and green onion.

In modern days, it became common to be brushed with takoyaki sauce and mayonnaise, and topped with green laver (aonori) and katsuobushi (shavings of dried bonito). There are many variations to the takoyaki recipe. For example, ponzu i.e. soy sauce with dashi and citrus vinegar, goma-dare i.e. sesame-and-vinegar sauce or vinegared dashi.

is a Japanese savoury pancake containing a variety of ingredients. The name is derived from the word okonomi, meaning "what you like" or "what you want", and yaki meaning "grilled" or "cooked" (cf. yakitori and yakisoba). Okonomiyaki is mainly associated with Kansai or Hiroshima areas of Japan, but is widely available throughout the country. Toppings and batters tend to vary according to region. Tokyo okonomiyaki is usually smaller than a Hiroshima or Kansai okonomiyaki. 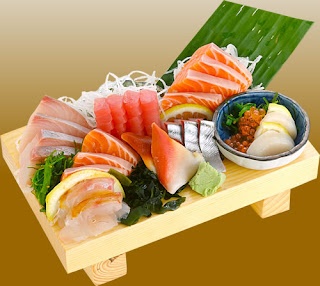 is a Japanese food consisting of cooked vinegared rice (shari) combined with other ingredients (neta). Neta and forms of sushi presentation vary, but the ingredient which all sushi have in common is shari. The most common neta is seafood. Raw meat sliced and served by itself is sashimi

is a type of Japanese confection, а red bean pancake which consists of two small pancake-like patties made from castella wrapped around a filling of sweet red bean paste.

It originally only had one layer, and the current shape was invented in 1914 by the Ueno Usagiya.

In Japanese, dora means "gong", and because of the simililarity of the shapes, this is probably the origin of the name of the sweet.

Legend has it that the first Dorayaki were made when a samurai named Benkei forgot his gong (dora) upon leaving a farmer’s home where he was hiding and the farmer subsequently used the gong to fry the pancakes, thus the name Dorayaki.

For this, I choose the Japanese one because the soloist singer has different and also their own unique voice. I love their voices.

For other Drama, I choose K-Drama. The setting, artist, story and acting is more interesting. Such as: Boys Before Flower vs Hanayori Dango.

My Girlfriend is a Gumiho 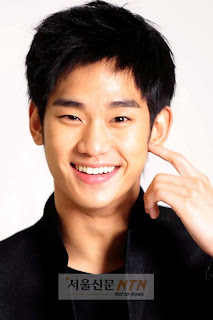 It’s teenager’s gathering and usually hang-out in Shibuya. They are unique.

Humb* I love Gothic Loli here. I wanna wear one of those costume >< kyaa!!

It’s make up do. The way of Korean girls looks more cute. Standard! 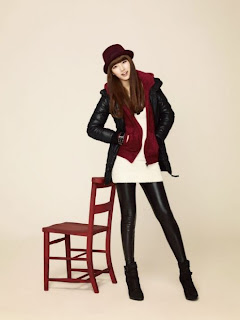 It’s simply but edgy. You can choose this one for style reference. Because, if you wear ko-gal clothes you will be recognized as abnormal person in this country.

Which one do you prefer readers?

Get your own Poll!

At last, I love both of them in some sector. I am still loving my own culture, Javanese and my country Indonesia. No one can beat Indonesia’s richness of culture and food. I love Sate, Bakso, Soto, Nasi Goreng, Ayam Bakar and other Indonesian’s spicy food :9 nyem nyem~

Written by Agista Saraswati at 7:41 PM